Charlie Gubb returns to the capital 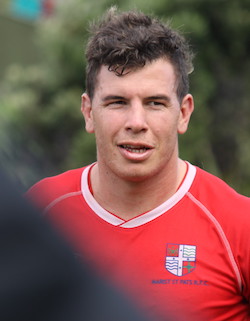 For the first time in 10 years Charlie Gubb is back living in his hometown of Wellington and he is feeling right at home. After a successful rugby league career that saw him play 39 games for the New Zealand Warriors (along with stints at Canberra Raiders and Widnes Vikings in the Super League), Charlie has settled back in the capital where he is working at St Patrick's College and will play club rugby for Marist St Pats.

A little over a week out from the opening round Charlie is looking relaxed, having enjoyed the preseason programme reconnecting with old friends and getting to know his new team mates. With close friends Valentine Meachen and James Proctor at the club, its been easy to settle in.

'I'm looking forward to playing with some good mates that I've never actually played in the same team with. It's going to be good fun playing with them and getting to know the other players better.'

Along with settling in at Marist St Pats, Charlie has started work as a teacher aide over the fence at St Patrick's College, a role which he is getting a lot of enjoyment from. 'I love working with the students on a personal level. It's great to be able to get to know them both inside and outside the classroom.'

Getting into club rugby is about having fun playing with and against some old mates, but with his last competitive game in the 15-man code for the Wellington College 1st XV about 10 years ago, Charlie acknowledges he has some learning to do. The coaches have him pegged as a blindside flanker, but he's quite happy to have a crack anywhere in the back row.

Charlie had his first game for Marist St Pats at the Spillane Cup, the annual New Zealand Marist presason tournament held in New Plymouth last week. 'I was a bit lost! But it was a great opportunity to learn about my game on the field, and spend some time with the boys off it'.