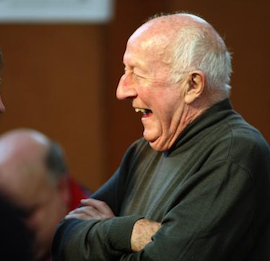 Marist St Pats is saddened to share news of the passing of Life Member and club legend Dan Kelly. We offer our sincerest condolences to Dan's family.

Dan Kelly played rugby for the St Pats Old Boys Rugby Club and after his playing days were over, he coached and joined the Management Committee of the Old Boy's Club, a position he held for a number of years.

After the amalgamation of the two clubs, Dan joined the management committee for the 1986 and 1987 seasons and was an active member of the Presidents Corner on a Saturday night where old and new stories would be debated, with vigour, over a pint.

In 1987, the Junior 3rd side, captained and coached by Mapu Solo could not find a manager. For weeks, Mapu took on the additional role of managing the team as well as coaching and captainancy. When approached, Dan jumped at the opportunity to help out. Mapu and his team mates appreciated this gesture from the man with `letters'. Team sheets were properly and neatly prepared, playing gear clean and crisp, refreshments provided, and referees were impressed. Somehow, Dan's managerial role escaped the club's annals.

Annual General Meetings of the club were highlighted when Dan stood to speak at the general business part of the agenda. His oratory skills were put to good use and newly elected board members were left in no doubt as to what was needed to be fixed and when it was supposed to be done, whatever the task Dan required of them.

Dan's work for the club, mainly behind the scenes, looking after club members bereavements and cards of condolences, organising club masses along with fellow life member John Gordon, collating and collecting teams sheets and results on a Saturday after club games, did not go unnoticed. In 1979 he was appointed to the Presidency of the Club, a year when the Senior side swept all before them, winning all 20 games and both Swindale Shield and Jubilee Cup double.

Yes, Dan was a legend at Marist St Pats. May he Rest in Peace.