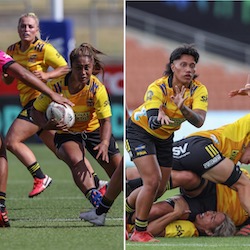 Rugby has made a huge step forward in 2022 with the inaugural Super Rugby Aupiki competition kicking off this month. The Hurricanes Poua had their season delayed after their first round match with the Blues was cancelled due to the Covid-19 outbreak, but they took the field and made history in Tuesday's match with Chiefs Manawa in Hamilton.

In the thick of it were two Marist St Pats players, with Monica Tagoai starting at second five and Ana Afuie coming off the bench. We caught up with Monica and Ana to get the inside take on the momentous occasion.

Monica: 'It was great getting out there finally with the team. It’s been a long process and build for us. We’ve been through a lot together as a team especially with Covid-19 heavily having an impact on our team, so getting out on the field was a goal for us. Many people were working behind the scenes to get us on field and for that we are truly grateful.

Ana: 'It was awesome to finally be able to get on the field especially after all the setbacks we’ve had to face with Covid and the competition changes and everything, so being able to get out there was massive.'

Monica: 'The most memorable part of game day was running out with my teammates and putting that Hurricanes jersey on for the first time.'

Ana: 'To me one of the the most memorable parts of the day was just waking up and knowing today's the day. The day we were going to make history for our club, our family and everyone who supported us. That was a memorable moment in the day for me.

Monica: 'Really proud of the effort the girls and I displayed but there’s always going a lot of learnings to take from the first game, but as a team I believe we can just build on what we done well and this week at training we are aiming to nail our core roles.'

Ana: 'Your time on the field isn’t promised so make the most of every moment and take every chance you get when you get on'.

While the result wasn't the one they were looking for, with a 8-29 loss. The Poua have the chance to notch a win when they take on Matatū on Sunday at 5.05pm. The South Island side feature former Marist St Pats player Marcelle Parkes who is now based in Canterbury.

Off the field, our own Melissa Moroney has also been making a significant contribution to the operation of the new competition. Mel is a Management Accountant for New Zealand Rugby and two key parts of her role are being the Finance Manager for Rugby World Cup 2021 (playing in 2022) and the Financial lead of Sky Super Rugby Aupiki. She has been part of the Aupiki project team since early last year and seen it through all its draft formats and Covid implications to the competition we’ve seen across Taupo and Hamilton the past few weeks.

Marist St Pats is incredibly proud of Monica, Ana and Mel for their trailblazing contributions to women's rugby in New Zealand!