The 'Battle of Kilbirnie' has been won and the Horan-Millar Trophy returns to Hataitai after our Premiers comprehensively beat Poneke by 50-18.

One could argue that the game was won in the first 30 minutes after a clinical Marist St Pats attack scored four tries to lead 24-8. Ryan Dafel and Tyrone Thompson scored the first two, before evergreen Isaia Petelo earned himself a brace. But Poneke struck back with a couple of their own and kept in touch at half time, scoring just before the whistle to keep in touch at 31-18 as the teams broke for oranges. That would be the last time the Street Kids would score.

When Aidan Morgan intercepted the ball 60 metres out and extended the scoreline 10 minutes into the second half, it looked like a done deal. Tries to Ryan Setefano and Sagele Aukusitino put it beyond doubt by the 60 minute. Two quick yellow cards saw MSP play with 13 men for the final 10 minutes, but the refused to let the home side score again.

Earlier our Premier Reserves also put a half century on the Street Kids, beating their counterparts by 54-10. Both the Premier and Premier Reserves sit second on their respective competition tables with three rounds to play.

In other results, the Under 85s had a big win, 59-14 over Wests. The Internationals and Presidents fell to Wests and Paremata-Plimmerton respectively.

Off the field and onto the court, our Netball team won their semi final 46-29 and will content their grade final next weekend. 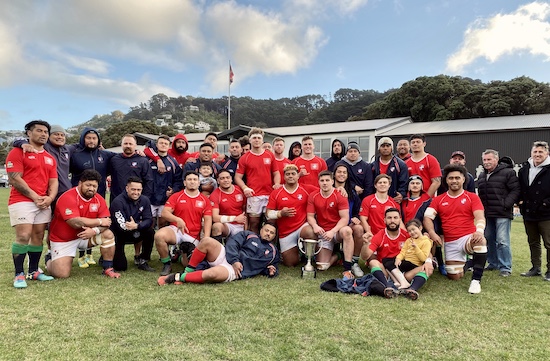