John Holden is a name known to many in the Marist St Pats Rugby Football Club, and in the wider circles of the Wellington Rugby community. John has been for many years a 'go to' man at MSP to get things done. 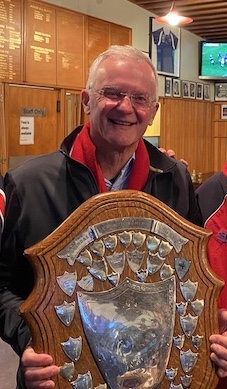 From the time John became the Junior Convenor in the late 1990's, there is not much John has not been involved with in the running of the club, in many instances behind the scenes.

John served on the Management Committee in 2007 and became Chairman from 2008-2010 and again in 2015. In between times he served as Deputy Chairman.

John's contribution was recognised in 2011 when he was awarded the W.M. O'Connor Memorial Cup for being an Outstanding Club Member.

John was instrumental in establishing the foundation that enabled the partnership with St Patrick's College to build the turf at Evans Bay that the club enjoys today, in both playing and practising facilities.

Many of the Old Timers Day successes can be put down to John's energy in tracking down and enticing old club members and players to attend.

He has been a flagbearer for Marist St Pats in more ways than one, connecting the management of the club with players and supporters alike; organising Club Masses and Club Chaplains; communicating the club's activities with Catholic newspapers, always with promoting the value of belonging to a successful Marist St Pats Rugby Football Club.

It is with these attributes and continued work with the club that I have great pleasure in nominating John Holden as a Life Member of Marist St Pats Rugby Football Club.

John Poutawera has been committed to managing rugby teams at Marist St Pats for 23 years, especially our club's second team which is the backup to our Premier team. Twice a week, every week of the rugby season John is at team training giving his assistance and support to many of players over this period.

On Saturday's John is on the sideline in shorts and a rugby jersey, running up and down on side line and onto the paddock giving his best to provide the best for players welfare.

After the game John is at the clubrooms an in blazer and tie, the best dressed person there. This transformation has always been very special for me and shows the immense pride that John has in being a member of Marist St Pats.

In 2013, John's outstanding contribution was recognised by being the recipient of the John Rennie Memorial Cup. John has had two sons playing for our club, Reece and Duane. Reece was a MSP great, playing in five Jubilee Cup and three Swindale Shield winning teams

What made John really special to me was in 2015, John wanted to thank Marist St Pats for the support and care it had provided to his boys. He presented a bell to be rung to gain attention for speeches etc and at the same time honour his grandfather James, a soldier who lost his life in the First World War 100 years earlier.

Marist St Pats extends our congratulations and gratitude to both John's and their families for their outstanding, and ongoing, service to our club!