The Under 85 Reds take on Wellington on Saturday at Hataitai Park for the Tony O'Brien Shield. Kick off at 12.45pm.

Finals week is upon us. Despite a really good pre-season and plenty of hard graft, the start of our season was delayed (thanks COVID-19!). Following a convincing win against Poneke in our opening game we faced strong opposition from Upper Hutt and OBU leading to two subsequent losses.

Next up were reigning champions Avalon, displaying some of the best rugby I've seen over my two years as coach, we outplayed them and a gained a deserved 29-12 victory which boosted morale and confidence within the squad. Unfortunately our winning form against Avalon was not repeated in the next two matches which saw us lose away at Eastbourne and a narrow loss against Wellington on Kilbirnie. 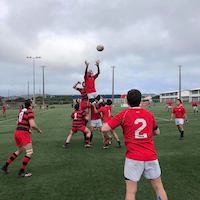 The roller coaster that has been this season saw us coming in toward the finish on a high. With two good wins against Wests and HOBM we finished in the number 6 spot, clinching a home semi-final against our neighbours, Poneke.

Playing into the wind during the first 40 minutes, we struggled to make an impact. Following a couple of errors we found ourselves down 17-0 at half time despite playing, arguably, the better rugby of both sides. Playing with the wind behind us we conceded the first try of the second half (24-0) which sparked us into life and ready to fight.

Tries from Ronan Brennan, Tony Natoli, Ollie Kerr-Hislop, Janakan Karunaharan and Jackson Martin saw the score tied at 31-31. With four minutes to go Henry Burns stepped up to the tee to kick a vital penalty from 30m out, securing the win and granting us a place in this week's final against Wellington.

Looking forward to Saturdays game we're hoping to have some players return to the field from injury including Co-Captain Calum Bron. The forward pack is strong with some excellent loose forward runners and, to accompany them, we have our sharp backline who have ran some truly fantastic lines this season. This combination should see us successfully cross the whitewash.

Wellington are a good side who never fail to stand up to a challenge. We've certainly been tested by them in the past but we can, and will, rise to the occasion. Last years "Wednesday under the lights" game is testament to this as we fought back from 22-3 down to secure the win 39-22. There is no denying that we'll have a battle on our hands and will have to start well and keep up the red wall defence to ensure victory on Saturday.

34 players have represented Marist St Pats in the Under 85kg grade this season, some with over 100 appearances for the club (Malcolm 'Mamba' Mashingaidze hitting over 150) and some who've made their debut for the Reds! On Saturday night I hope we can all share a vessel or two to celebrate a win and our season as a whole!

To copy a speech from the British Lions, who we've borrowed our colours from, 'this is our Everest!'

Catch up on the results for the season to date