Where are they now? Gerard Wilkinson

We catch up with players and club members from years gone by and see what they're up to now...

Gerard Wilkinson was a physical lock and a stalwart of the Marist St Pats Senior (Premier) team for over 15 years, playing 169 games. He played 106 matches for Wellington from 1980-87 and is now based on the Gold Coast.

What are your favourite memories from your playing days?

Being an Marist St Pats team member 169 times, seeing development in young players, the wins but also the close losses vs Petone when we were both seriously good heavyweights of Wellington Rugby.

Being involved in the 1978 trip to Ireland was the catalyst to greater things for me. I played against my second cousin in Limerick he was the Captain of Young Munster think it was the 29th of October 1978, Gerry Casey. You see my mother was born in Saint Mary's in Limerick, she even coached an U13 team before emigrating to NZ in 1956 so she was happy that I played Rugby even though it was a late start.

Another great overseas tour was getting off to South East Asia in 1985, it was a very young team with a sprinkling of older fellas like myself and Meach. That tour saw Matt Smith and Damien O'Brien develop into a great duet, I mean duo.

At college, St Pat's Town, the late Fr. Bill Durning asked me the question 'are you going to use that height one day? I'd like you to play rugby next year (1974)' and I did and enjoyed it. The following year Fr Johnny Unverricht was our coach and again he instilled some great memories of 1st XV rugby.

The coaching was above average for those days. I think we were treated having a bunch of great coaches like Mick Horan, Ice Coulter, Kevin Horan and former players like Zukov Marinkovich and Maurice Standish. A personal coach Fred Sawaya improved my standing jump from 19 inches to 33 inches in just three months. He was a great guy before his time for a lot of younger MSP players.

I was also lucky to have a great Water Polo/Surf life saving coach, Ian Frew, who watched every game at Athletic Park and was a good sounding board, he died very young before his time.

Today there is a coach for everything, plus the visual tech stuff is now amazing. It would have been great to play this type of game these days, I might have had to carry the ball a bit apart from touching it fleetingly in lineouts and kick offs.

Drinking beers with your mates on a Saturday night at the club was great character building stuff but these days I realise it was the worst thing you could do after playing footy.

Who are some of the characters you remember?

Maurice Standish, Cliff Rona, Henry Huriwai, Butch Wilson, off the field Michael Darcy Fitzgerald and Budgie Jacobson - they all have their own stories too many to recall really.

Who was your toughest opponent?

Toughest opponent skill wise were Andy Haden and Murray Pierce, but out and out toughness was Steve Hinds, I'm glad I never had to play against him.

Although there was one story in the mid 80's, 245pm at Maidstone No. 1 vs Upper Hutt and this was always an expected win but they were never easy. You had to play them fairly hard and keep them honest because if they got an upper hand they could do some damage. On this particular day a member of the opposition (No 8 initials I A) was playing up and needed to be brought into line a bit - nek minute we were all climbing into a ruck and Hindsy smacked the living daylights out of me. He tore an inch slice through my nose I think I had three nostrils there for a minute. Hindsy carefully inspected his handy work and apologized saying that my head was right next to Isaac Adams and he missed him and you'll be right he said and carried on.

On another level my mother was my harshest critic, she had an unexpected level of perfection and gave it to me if we had a loss.

What have you been up to since you finished playing?

When I finished playing footy I carried on playing water polo and played 29 international matches for the country until 1994 World Champs in Rome at 38. I retired but still play at a competitive level on the Gold Coast and played at some world Masters events (50+, 60+ age group) obtaining a silver at the 2008 World Champs in Perth 50+ with the Brisbane Barracuda's.

I follow SPC rugby on Facebook and watch the MSP stuff that is put up; I find it's really good watching young fellows come along and some who are sons and nephews of past team mates, very rewarding to see.

What does Covid-19 look like in your part of the world and how is life different at the moment?

COVID-19 has affected us all and the world will never be the same. I'm looking for another job at present and it's a challenge because of this, but something will appear it always does.

My wife, Shirley, and I often walk on the beach to get some fresh air. We are down by Pacific Fair in Mermaid or Broadbeach, so it's either a 10km round trip to Nobby's beach or turn left to Surfers Paradise about 8km. Whichever way there are sights for sore eyes if you know what I mean. It keeps you young! When there is a wave it's nice to get in and catch the odd one. 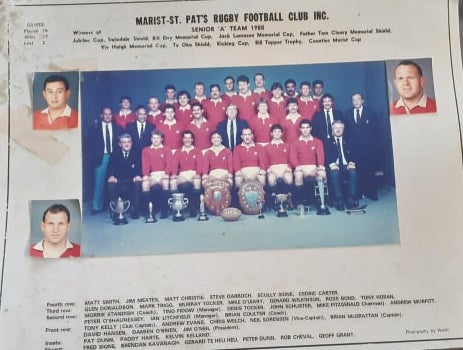 Chairman Rob Evans recently shared an update on the state of affairs as we all cope with the uncertainty created by Covid-19.

We appreciate you will all have your own personal and business challenges at this time, but we hope that remaining a financial member of MSP during these tough times will be a rewarding experience in the better times when the surely they will return.