By Alistair Garvie and Tim Donoghue

A century of rugby rivalry between two Eastern Suburbs rugby clubs - Marist St Pat's and Poneke - will be celebrated at Evans Bay Park on this Saturday 1 May. 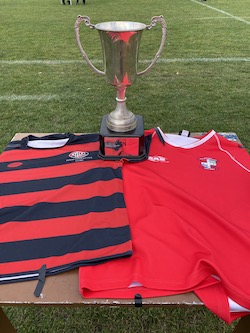 Poneke had been battling it out since 1883 on the top playing fields in Wellington.

Poneke won the match 10-0 and went on to win the Wellington club rugby championship in 1921.

For the 1921 clash with Marist, Poneke fielded a team that included six former, current or future All Blacks, a North Island rep and six other Wellington reps.

A century after this match was played MSP will play Poneke in the Eastern Suburbs on May 1, 2021.

Senior and Premier matches between MSP and Poneke over the last 100 years have always been spirited affairs and this first match certainly set the scene. It was not so much the players having a go at each other on the field; it was the spectators who caused the problems off it.

The Evening Post reported the two teams attracted a large crowd and the struggle would be remembered for a long time by those who saw it.

Marist put up a fine performance in their earlier pre-season senior match against Athletic and the fledgling club in the senior competition had a large following.

The big negative in this inaugural Marist versus Poneke game however was that play was interfered with by the spectators crowding onto the field.

Referee Joe Moffitt held up play often to enable the game to continue.

The crowd paid little or no attention to him and the solitary policeman present was helpless against them. It was only as a result of both captains appealing to the sporting instincts of the unruly spectators that the field was left to the players, The Evening Post reported.

Interestingly, given where Poneke and MSP are based now, the 1921 game was played at Kilbirnie Recreation Ground. The park had been created gradually over the previous two decades by reclamation from Evans Bay and Senior rugby had been played there since 1919.

It was the closest playing field to the Poneke gymnasium, 1km away at Waitoa Road, Hataitai, which Poneke had established in 1909.

Completion of the Hataitai Tram Tunnel had provided direct access to Hataitai from the city and was a catalyst for the club's move to the Eastern suburb. Excavated earth from the tunnel was no doubt some of the earliest fill that went into Evans Bay to create the Kilbirnie Rec.

The Marist team's Captain, James Troy, was a tall, regular try-scoring loose forward who had been a Wellington representative since 1918 while playing for Poneke.

Indeed, he had been the Poneke team's Vice-Captain in the previous two seasons and had transferred to Marist in 1921 on their promotion to the Senior grade. Clearly, the intense rivalry between the two clubs that continues today was set in place from the outset!

Familiar Kilbirnie conditions prevailed for the 1921 match - a gale was blowing down the ground! Poneke scored their 10 points with the wind in the first half and managed to hold Marist scoreless through the second spell.

Marist St Pats host Poneke for the Horan-Millar Trophy at Evans Bay Park this Saturday. All Marist St Pats and Poneke players and supporters are invited back to our Hataitai clubrooms after the match.