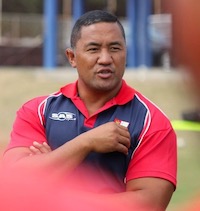 Chairman Rob Evans is delighted to announce that Zak Feaunati has been reappointed Head Coach for the 2020 season, after taking over midway through the 2019 season and winning the Hardham Cup. Zak has a wealth of amateur, professional and overseas coaching experience and was selected as MSPs greatest ever No.8 in it's 25th Anniversary team in 1995.

Zak will be assisted by this year's unbeaten Premier Reserve coaches Dan Kauraka and Edwin Meachen, both themselves long time MSP players and coaches. The old firm of Mike Sood and Stephen "Porky" Jensen return on the bags with former Colts coach Mike "Venus" Tolova'a taking up the Manager's role.

We are also delighted to announce that Ryan Setefano has been reappointed as the Women's coach after a successful 2019 season, and will assisted by Lucky Tuia and manager Valerie Moon.

Fa'atonu Fili has been appointed Rugby Development Officer and will support Zak's current Director of Rugby role which will be divided up for Zak to take the coaching reigns and also develop our young coaches further.

Congratulations to all and we look forward to getting behind you to make 2020 a successful season. This is an exciting period for the club as we gear up for our 50th anniversary celebrations next year and develop and new era of coaches and managers

The rugby sub committee is working hard on filling other coaching appointments and we will make make further announcements shortly.

Play for Marist St Pats in 2020: Offseason training is now on every Monday and Wednesday night. Contact us if you have any questions.