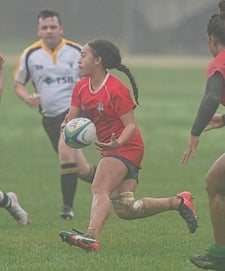 Our Premier Women's side have named playmaker Cheyne Copeland as their captain for the 2021 season.

A member of the Women's side for the past four seasons, Cheyne is a competitive and confident player who is never afraid to back down or step up to any challenge. She has a leadership style that encourages the group positively and challenges them to be the best they can be. Cheyne has also been involved in the Wellington Pride for the past few years after making her debut in 2017.

Cheyne will be backed by vice captain's Jane Bryce and Ana Afuie who both have a wealth of experience and will work well together to help guide the team through the season on and off the field.

Alongside the formal leadership group, Black Ferns Monica Tagoa'i and Lyric Faleafaga, when available, will also bring excitement and leadership to the side. There are also some new experienced recruits in the forward pack that will help with a couple of new forwards jumping into their first ever season with the team.

Our Premier Women kick off their season this Saturday against Oriental-Rongotai at Polo Ground, kick off at 11.30am.