It is with heavy hearts that Marist St Pats acknowledges the passing of Life Member Agnes Madden last Saturday. 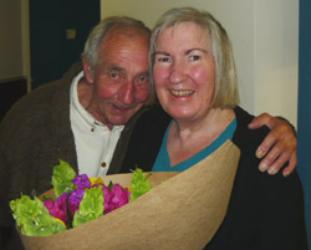 Aggie was a staunch supporter of Marist St Pats, who along with husband Jimmy Madden Sr, provided major sponsorship to the Club in the 1990s, through their business, The Regent Tavern. As well as providing financial sponsorship, Aggie was a member of the Club's Management Committee, the Clubrooms being her "turf".

At the time when the clubroom numbers on a Saturday were triple that of today's, Aggie was part of the Clubroom Trinity, who along with the late Anastasia Reidy, MSP's own Master Chef, and the late John Gordon, the official greeter, ensured the Clubrooms ran like a well-oiled (red) machine.

Awarded Life Membership in 2010, Aggie was both loved and respected in equal measures. Firm but fair, she had a lovely way about her that was very effective in setting the family vibe at MSP. Aggie's energy, ability and vision made her the ultimate go-to person for all events. Aggie's ability to do everything was secondary only to her ability to do the right things at the right times. "No problem darling" was Aggie's standard response, even to the most daunting request! She made the difficult tasks seem easy, and always delivered with a smile and a welcoming hug.

The Marist St Pats family extends our heartfelt condolences to the Madden family.

Aggie's funeral will be held at 11am on Wednesday 4th September at St Anne's in Newtown.