Saturday night was an opportunity to celebrate all the on and off field achievements at Marist St Pats this season. 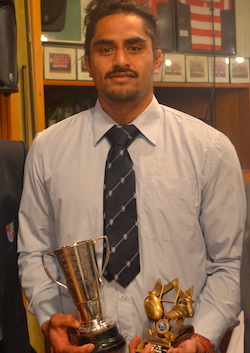 Lock/flanker Josh To'omaga was awarded the Paul Donoghue Trophy and named Sportsman of the Year following an outstanding season that saw him shake off recent injuries to be the consistent force in the forward pack. Josh has been a feature in the Wellington Development side since the club season finished.

The W.M. O'Connor Memorial Trophy for the most outstanding club member was awarded to Club President Ken Ah Kuoi. Ken has worked tirelessly in this role since being appointed in the offseason and a much deserved recipient.

Lock Tom Martin was awarded the prestigious Mick Horan Memorial Trophy on the back of an outstanding rookie season. Tom was playing for the Waikato Under 19s but sent some comments about the honour that were read for the club.

The big story on the night was the Premier Reserves who cleaned up a number of trophies on the back of their unbeaten season and following the announcement they've been nominated for Wellington Club Team of the Year.

The side claimed the Fr. Geoff Broad Memorial Cup for Team of the Year and the William Te Oka Shield for the Team Scoring the Most Championship Points. Manager David Pierce was named the Most Outstanding Contribution by a Non-Office Bearing Club Member (Brother Fabian Cup) and also came away with the Club Captain's $500 prize draw.

Fullback Henry Burns was awarded the John L. Gordon Memorial Cup for Most Meritorious Premier Reserve Player and the St Pat's Old Boys Cup for Most Kicking Points Scored. It was a privilege to have John Gordon's daughter Mary-Anne with us to present the trophy awarded in his honour.

Congratulations to all who were recognised on Saturday. As Chairman Rob Evans noted, it's hard to select individuals from so many contributions, but those recognised were worthy recipients.

A full list of Prizewinners and Team MVPs can be found here.