Vince Sakaria became the 42nd player to play 100 Premier games for Marist St Pats as the Premiers won their third consecutive match to start the season.

After a week of dismal weather in the capital, the sun was shining at Evans Bay on Saturday, albeit with a strong northerly. Our Premiers turned in a strong first half performance in their first game on their home track.

After phases of strong attack, it was in the 18th minute that the Red Machine crossed the line for the first try of the game. An attacking scrum 15 metres out saw James Proctor advance the ball followed by quick recycling by the forwards to see Tom Horan crash over. Horan was industrious throughout the match.

Ten minutes later the forwards were again pummeling the Wainui line, after a few cracks at the chalk it was Josh To'omaga who scored setting up a 17-3 halftime lead.

The Red Machine came out of the blocks quickly in the second half with Tyrone Thompson scoring next to the posts 90 seconds into the half and the Evans Bay faithful were wondering if they would see a repeat of the previous week's fireworks.

It wasn't to be, as struck back quickly to narrow the margin to 24-10. From there the game lost its shape a little, not helped by a yellow card for the home side midway through the half for repeated infringement. Despite a number of opportunities to claim a four-try bonus point, our side had to settle for a 27-10 victory.

Our Premiers take their unbeaten record on the road to Petone Rec next Saturday to play the old foe in a weekend that will start shaping the overall competition table. For the second straight week we could be welcoming another member of the centurion club with Andrew Wells sitting on 99 Premier games. 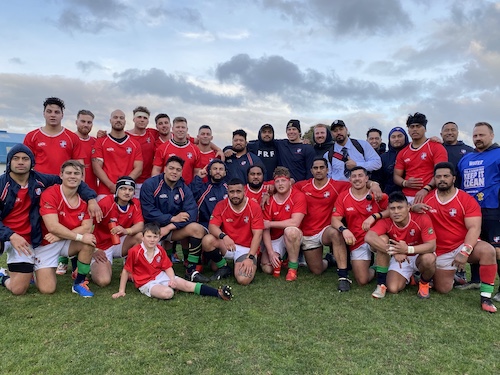