The 2019 season lasted a matter of minutes for Premier fullback Andrew Wells before injury saw him forced from the field.

Many of the Evans Bay faithful will be unaware that despite playing every game in 2018, the former Wellington Lion had been plagued by plantar fasciitis, which is like inflammation of the ligament on the bottom of your foot.

That injury came to ahead in the 2019 season opener against Poneke when he recalls 'I felt a big pop in my foot while I was jogging into position and that plantar fascia ligament ruptured completely.'

Instead of preparing to play his 100th game for the Red Machine (he now sits on 98 caps), Wells would turn his focus to rehab. 'After all the MRIs and X-rays I got given a rehab process from the specialist which just involved strengthening the arch of my foot with different exercises. It's been a pretty long process - it took about 8 or 9 months before I was given the go ahead to start doing some running again.'

A stalwart of the Marist St Pats Premiers since his debut out of Wellington College in 2012, Wells has been a very durable player so the long injury layoff was naturally challenging, particularly as the team struggled through the Swindale Shield round in 2019.

'Last season was more frustrating than anything, we had a good team but only really turned up for the big games. I think the main thing we will have taken from last year is that every game is important, especially with the shortened first round.'

Looking ahead to 2020, Wells and the rest of the squad are well aware the expectation of a return to form are high as the club celebrates it's 50th Jubilee but is naturally focused on getting back on the field and having some fun with his team mates.

Despite being only in his mid-20s Wells also recognizes the important role the experienced players play in mentoring the younger squad members. 'I guess back then when I first started in 2012, I was just following the older guys as a kid first year out of school. Now it's us more experienced guys role to do what was done for us, lead from the front and show the young guys the ropes.'

Andrew will get his first chance to return to the field on 20 March as our Premiers host Old Boys-University in their Swindale Shield opener at Evans Bay Park. 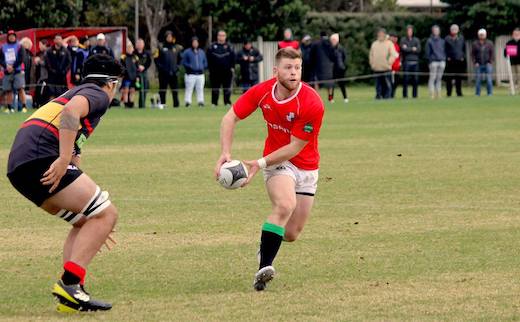