Veteran players Jaydah Timu and Monica Tagoai have been named as the co-captains for our Premier Women's team in 2020. 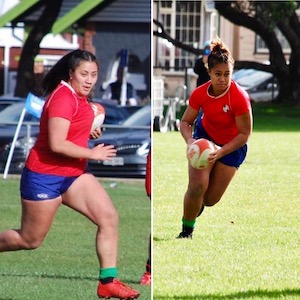 Coach Ryan Setefano felt the pair were logical choices because 'they have the respect of their team mates and are natural leaders by example'. The team is blessed with a large group of players with leadership qualities who will further support the pair.


Both Jaydah and Monica were surprised to be tapped on the shoulder to take the responsibility - humility is a common trait in this side - with Monica needing some convincing but ultimately wanting to contribute in any way that supports the team.

2019 was a successful season for our Premier Women, winning the division two Izzy Ford Trophy in the second round. Jaydah has ambition for the side to compete for a top four place this season, 'with Monica as Co-Captain I know we will be able to smash this goal we have set!'

Monica is encouraging the side to 'take it week by week and see improvement and growth in our game as individuals and as a squad.' Based on the growth in this team over the previous few years, that will end up with the same result.

Our Premier Women get their season underway this Saturday against Oriental-Rongotai at Polo Ground, kick off at 11.30am.

Thank you to all who have supported Marist St Pats by becoming financial members. Financially, Marist St Pats relies on sponsorship, grant funding and members subscriptions in order to provide our community with the facilities to train, play and congregate as a club.

We've now made it easier for anyone around the world to contribute as a member by accepting card payments. If you're in a position to support our club, your membership/donation is gratefully received.