Premier Women kick off their campaign against Norths

Our Premier Women are about to embark on their fourth season since reforming in 2016. Since then the side has gone from strength to strength, winning their first round (division two) competition in 2017 and holding their own in division one in 2018.

In preparation for the 2019 the team has had a busy preseason which concluded last weekend with a 'game of three halves' against Petone and OBU. Coach Ryan Setefano says they have learned a lot on the field over preseason but also created a unique bond off the field and can't wait to see how the season unfolds. 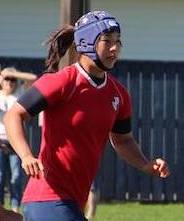 'The competition is looking very competitive which we have experienced first hand having already played OBU, Petone and Ories (in preseason) and watching Paremata-Plimmerton after our game last weekend - there are a lot of talented teams out there.'

There are many talented players in this team but watch out for Maki Takano (right) who has come for the season and plays for the Japan international team; Cheyne Copeland who should be returning from a long term injury in the next few weeks; and Black Fern Marcelle Parkes who is looking fit and strong.

Following a season ending injury to Black Fern Monica Tagoai in preseason, the side will be captained by Taimane Siaosi who Ryan says has become a great leader this year. Taimane will also have a handful of leaders around her to help run the side.

Our Premier Women open their season against defending champions Northern United at the Women's Gala Day at Ngati Toa Domain, kick off 11.30am.