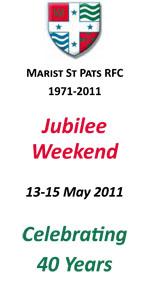 The club celebrated its Ruby Jubilee in 2011, marked by an anniversary dinner on Friday 13 May, a luncheon before the MSP v Hutt Old Boys Marist clash at Evans Bay on the Saturday, a 'dooley hooley' back at the clubrooms on Saturday evening and a Club Mass on Sunday.

Click on the anniversary programme at right to view the welcome from MSP President Mick Robbers, a list of MSP players who have gained international honours 1996-2011, club office holders 1996-2011, and reminiscences from the club's first chairman, Ron Evans.

Here also are photo galleries of:

To mark MSP's 25th jubilee in 1996, the late Ivan Vodanovich, a former All Black selector and coach and MSP life member, picked a team that was, in his opinion, the best of the players who had represented MSP in the club's short history.

His selection, which included six All Blacks and a Maori All Black captain, was: 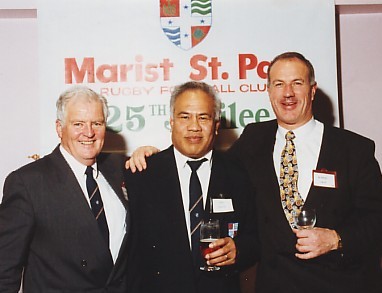 It was a great occasion at MSP's Evans Bay gym on 15 May when past players and supporters gathered for the unveiling of the club's new Honours Boards, and to watch the premiers' match against Petone.

MSP president Mick Robbers presented the club's centurions present with badges to recognise the 100 games they played for MSP's premier team. Noreen O'Callaghan was warmly thanked for her contribution to the Boards, which also recognise the club's Sportsmen of the Year and the winners of the Mick Horan Memorial Trophy.

The afternoon was capped off with a clean sweep of wins over Petone by the premiers, senior 1s and senior 2s. See the rogues' gallery for photos of the past players and supporters. 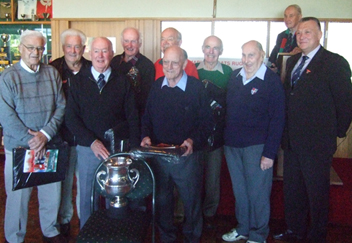 These members of the 1949 St Pats Old Boys senior side were the second team in Marist St Pats to win a Jubilee Cup.

The Marist club had first won the trophy in 1948, and the team above shared it with Petone a year later. Marist went on to win it again in 1950. Marist and SPOB later merged in 1971.

Sixty years after their 1949 victory, members of the SPOB team gathered at the clubrooms on Old Timers' Day, 4 May 2009, to celebrate the occasion.

They came via their parted ways on a night of wind and rain, sensing a Mick Horan smile hovering above their old club and reunion weekend activities.
They were, of course, members of the champion 1978-80 Marist St Pats senior A rugby teams who attended a reunion weekend from Friday 2 June, to Sunday 4 June 2006 in Wellington.
The champion 1979 MSP Jubilee Cup winning team was one of the best sides ever to take the field in the history of New Zealand club rugby. So it was appropriate that team members should honour their coaches Brian Coulter and the late Mick Horan in their own personal and special ways.
Former club chairman John Knox made a small presentation to Mick’s widow, Jo Horan, for a lifetime of service to the Marist and Marist St Pat’s clubs at a function at the MSP clubrooms on Friday, June 2.
Tony Duffin too made a similar presentation to his fellow life member Coulter - who at the reunion weekend was accompanied as always by his wife Carole - at the Latitude 41 restaurant function on the Saturday night.
A number of former players from the champion 1979 team also paid their own individual tributes to Coulter and Horan - following in captain Kevin Horan’s and Maurice Standish’s official speaking footsteps - in their impromptu speeches at the dinner.
The captain of the 1978-80 teams Kevin Horan and his wife Jan traveled from Japan - where Kevin has a coaching contract - to attend the reunion. Billy TeOka and his wife Anne-Marie travelled from Australia to attend.
The champion 1979 team was in its embryonic stages in the late 1960s when Coulter, who played halfback in Wellington provincial rugby’s best ever win (over the Springboks on Athletic Park in 1965) assumed the coaching job of the old Marist Club from Mick Horan.
Beneath their protective umbrella was a midfield back by the name of Cliff Rona, Mick Horan’s brother Kevin, and the biggest rugby character to ever don an MSP jersey, Standish himself.
The five of them were very much on the scene in 1979 when the MSP juggernaut swept all before it with a clean-sweep - played 20, won 20, with 391 points for and 123 points against record. This sequence of wins was part of a 42-match winning run.

When the weekend was all over Coulter - the sort of person Johnny Cash had in mind when he sang the immortal lines - ‘no, I won’t back down’ (how else to you think the Coulter and Horan-coached teams beat Petone?) - had the last word.
‘It was special,’ said Coulter.
Today’s premiers and coach Brendan Reidy did their bit to help make the weekend a great success with a great 30-21 win over Poneke on Kilbirnie Park.